Mr. Whang has represented national and international corporations, restaurants, night clubs, and international insurance syndicates. Mr. Whang recently obtained a favorable judgment in an arbitration, saving his client over $1.2 million. Mr. Whang has also successfully filed and won an appeal against a prior adverse judgment in a professional liability case, as well as numerous motions for summary judgment in favor of his clients. In a case involving claims under the Fair Housing Act and Unruh Civil Rights Act, Mr. Whang successfully prepared and argued a demurrer, eliminating his client’s exposure to punitive and statutory damages. In a catastrophic injury case against his client, a global consumer products company, Mr. Whang successfully overcame a Motion to Quash Summons and Cross-Complaint for lack of personal jurisdiction, filed by a third-party manufacturer, which allowed his client to bring the third-party manufacturer into the action, resulting in a significant reduction of his client’s exposure to damages.

Mr. Whang graduated from Loyola Law School where he participated in the Scott Moot Court Team, the Iraqi Refugee Assistance Project, and the Primetime Middle School Mock Trial Program. Mr. Whang graduated from University of California, Berkeley where he received a B.A. in Legal Studies. He is admitted to practice in the state courts of California and the Central District of the United States District Court.

Mr. Whang is a loyal Cal alumni, who enjoys watching sports, golfing, running, weight-training, and cooking in his free time. He also enjoys traveling and spending time with his wife. 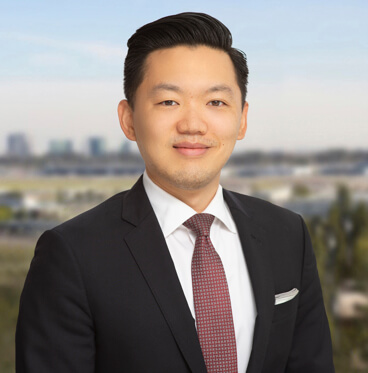